This is my new DeWalt DW735 thickness planer. 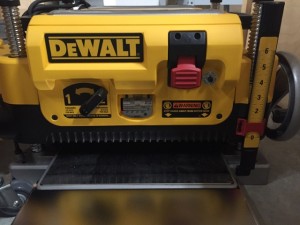 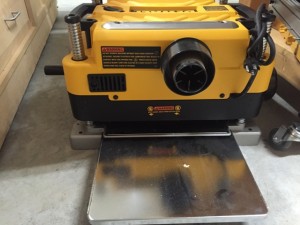 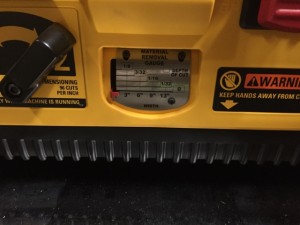 It took me weeks of research to decide on getting this one. My choices were:

I previously had a Delta 22-580 that I loved but regrettably sold during my no-shop period, however they are no longer available, having been replaced by the 22-590X and the 22-555 which is a bit cheaper.  As much as I liked the Delta planer the one thing that bugged me was the amount of snipe that I kept getting on it.  I tuned it as best I could and followed all the tips I read in the magazine but still I would get snipe on expensive pieces of wood, so this time around I was willing to spend a little more money on a planer that didn’t mess up so much wood.

I liked the look of the Steel City planer as it had the helical cutter heads that everyone seems to rave about. By all accounts the helical heads give a much better cut and you don&’t need to replace the whole blade if there is a nick – just the one piece that was damaged.

The DeWalt DW735 seems to be the Rolls Royce of bench-top planers.  It is hard to find a bad review of these things online.  They are a little more expensive than the others but most of the reviews seem to agree that there is less snipe on these than any other, which was the most important decision for me.  Wood is expensive in itself so the extra cost should soon pay for itself.

The thing that finally cinched my decision was finding out you can get helical cutter heads for the DeWalt as an after-market upgrade so I could still do that later if I wanted to.

So I bought the DeWalt DW735X (the “X” means it comes with some extras – fold out wings and some spare blades) and I am so far very happy that I did.  The thing is really solid and seems to cut very well, and the blower – wow, that thing can clear chips out of the way without a vac, however I wouldn’t advise it as it would get very messy very fast.

All in all, I am pleased with my decision. Time will tell how long the blades last and if any snipe creeps in.  If so, I will report back with my findings.

I used the planer recently on some 12″ long poplar and found it produced some serious snipe about 3 inches in from the end of the board on each board I pushed through. I was only shaving off 1/64″ each pass but the snipe was quite noticeable.

I am very disappointed since this was a major selling point of this planer. I spent some time playing with it and did manage to get it a little better with some tweaking of the in-feed and out-feed tables, but you still need to put a little upwards pressure on the board on the way out. It is not as set and forget as it claims to be.