After buying our new Ektorp couch from IKEA we decided that we missed the wooden arm rests on our old one. We used to like being able to put drinks on the couch arm while watching our nightly TV show, so I went about building some holders that wrap our couch arms and are perfect for setting a drink on.

I started with a piece of poplar from Home Depot that I cut into two 12″ long pieces.

Next I measured the width of my couch arm rest and worked out the length of each side piece that I needed.

I ripped one of the two pieces into two – one for each side of the arm rest. Gotta love my Saw Stop table saw. It cuts like a dream.

I then ran each piece through my DeWalt planer to flatten them and smooth them out.

Next I used my new Kreg Pocket Hole jig to drill some pocket holes into each side piece.

I then clamped the pieces to some right angle jigs I have and glued and screwed them together.

Once I had sanded the whole thing to 220 grit, the next step was to test it for size

And to see whether it could hold a beer

It passed the tests so next step was to stain it and put some coats of finish on it. For the stain I used a basic wipe on cherry stain.

The for the finish I used General Arm-R-Seal since it is so easy to apply – again just wipe on three coats, sanding to 400 grit in between coats. 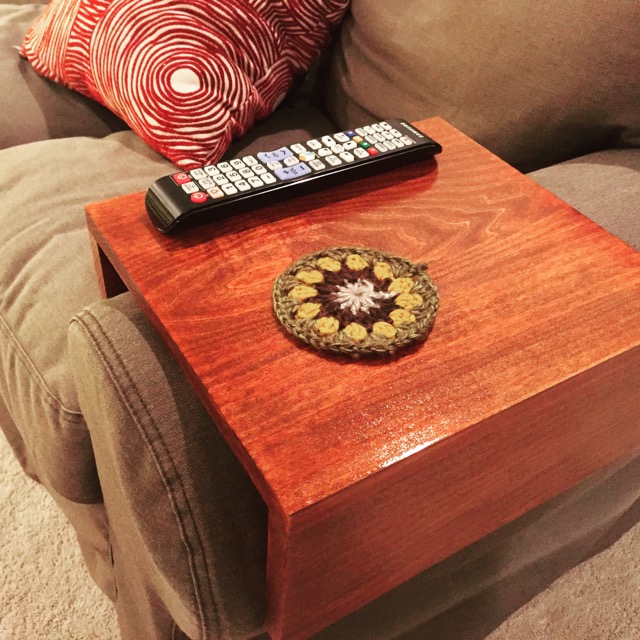 I think it came out pretty well. Apparently so did my wife as she insisted I build a second one for her side of the couch. 🙂